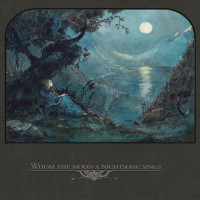 Disc II
01. Nhor - Upon The Wind Its Wings Beat Sorrow Into The Stars
02. Ulver - Synen
03. Neun Welten - Pan
04. Tenhi - Kausienranta
05. Bauda - Ocaso [acoustic version]
06. Orplid - Stille [demo]
07. Nucleus Torn - Krähenkönigin III
08. Lönndom - Språnget Ur Ursprunget
09. Syven - How Fare The Gods?
Additional info
"Whom The Moon A Nightsong Sings" is a compilation of rare value - not only because of the fact that this is one of the few conceptual compilations that are based around a central theme and where the choice of artists present was subjected to a rigid selection. No, "Whom The Moon A Nightsong Sings" is a two-CD collection with a playing time of over 100 minutes that unites all the main players and the most promising newcomers of a nameless genre that is defined by (mostly) acoustic musical settings of nature's sceneries and impressions, or of personal sentiments mirrored in nature. This profound respect and a deeply romantic magical and mystical perception of nature are the common denominator of all the featured artists and the thematic foundation of their contributions. The fact that nearly all of the songs included here are either exclusive to this project or rare tracks that aren't otherwise available anymore serves to emphasize the extraordinary character of this release.

One of the highlights on "Whom The Moon A Nightsong Sings" is certainly Empyrium's contribution - the ensemble's first new recording in four years and the impressive beginning of a new creative period. Also featured are the genre's founding fathers, Ulver, with a very rare recording from 1997: their track 'Synen' was only featured on a very limited underground compilation and is probably the Norwegians' most sought-after song. The contributions by bands such as October Falls, Nest, or Neun Welten - artists who have forged the genre's identity in the last ten years and have become major points of reference for lovers of dark, nature-attuned acoustic music - or by as-yet unknown quantities such as the British project Nhor or Syven from Finland are also delivering the goods and certainly bear comparison with the genre's founding fathers. The enchanting cover artwork courtesy of Fursy Teyssier (Les Discrets) tops off a release that, because of its musical content, is certainly going to remain a unique and unrivalled audio document for a long time.