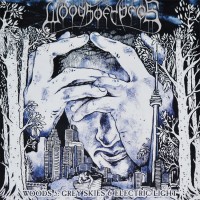 Additional info
This album was first released as a free promo on the web on December 23, 2011 by Earache Records when they learned of the death of founding member David Gold. The promo contains 192 kbps mp3s, lyrics, and the promo artwork, which does not have the band's original band logo on it. It has a different track order as well, also splitting "Kiss My Ashes (Goodbye)" into two parts and omitting "Keeper Of The Ledger."