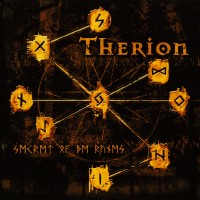 Additional info
Produced by C. Johnsson and Therion.
Engineered by S. Karppinen.
Assistant engineering by K. Niemann and C. Johnsson.
Mixed by Mikko Karmila.
Mastered by Mika Jussila and Mikko Karmila.
Recorded during the spring 2001 at Modern Art, Stockholm, Sweden.
Mixed and mastered in June-July at Finnvox, Helsinki, Finland.
All songs on Secret of the Runes were written by Christofer Johnsson/Thomas Karlsson, except "Ginnungagap" which was written by Kristian Niemann/Christofer Johnsson/Thomas Karlsson.
All classic and opera arrangemants by C. Johnsson.
German translation on "Schwarzalbenheim" by Christian Ratsch.
Cover & Layout by Thomas Ewerhard.
The bonus tracks on this CD: Recorded at DA Studio, Stockholm, winter 1999 by Sami Karppinen.
Remixed at Finnvox Studio July 2001 by Mikko Karmila.
Mastered at Finnvox Studio July 2001 by Mika Jussila and Mikko Karmila.
Additional melodies and classic arrangements by Christofer Johnsson.

This album was also put in a paper folder in the back of a German limited
edition of the Uthark book, written by Thomas Karlsson, discussing the Uthark-theory first advocated by the Swedish professor Sigurd Agrell in the in the 1930's. It basically meant that there was a deeper, (darker), secret (magic) side of the runes that only the runemaster knew about.