Kataklysm are thrilled to announce that this August they will embark upon a USA tour with death metal veterans Deicide. Performing as support acts on this trek will be Internal Bleeding and Begat The Nephilim.

Kataklysm have just put out their 14th full length studio album, Unconquered. Coinciding with the release, the band offers a music video for "Cut Me Down" track, featuring Tuomas Saukkonen on vocals.

Kataklysm have recently parted ways with drummer Oli Beaudoin, who was with the band for the last six years. At the same time, Montreal (QC) based metallers introduce James Payne ((ex-Hour Of Penance, Hiss From The Moat, ex-Vital Remains)) as permanent replacement.


Kataklysm - Launch 'Underneath The Scars' Single

"Underneath The Scars", a brand new single from Kataklysm, has been revealed. The track appears on the forthcoming album Unconquered, due out September 25th via Nuclear Blast.

This coming fall, death metal powerhouse from Canada Kataklysm will be releasing their fourteenth studio record. While we will have to wait a bit longer for the exact release day and most of other album details, the band now share and present the official title - Unconquered.

Yesterday, Kataklysm vocalist Maurizio Iacono checked in with an 'end of the year video message', in which he also stated that the band's upcoming full-length effort is completed. Even though, Canadian death metallers have been touring a lot in 2019, promoting their latest record Meditations, they had still time to focus on creating new music. The album was produced by Colin Richardson and has been set for the official release on August 22nd, 2020. More to follow, stay tuned. 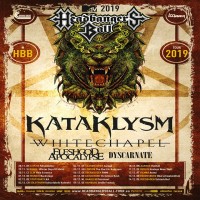 'MTV Headbangers Ball Tour' is set to overtake European stages once again this November and December, with Canadian death metal heavyweights Kataklysm in a leading role. Next to Kataklysm on the bill are US based metal squad Whitechapel, Italian label mates Fleshgod Apocalypse, and UK's Dyscarnate as an opening act. 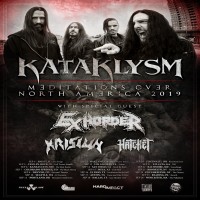 Canadian masters Kataklysm will be touring the States' this fall, performing in support of their latest effort Meditations, which was released approx. one year ago. Special guests on the road will come from Exhorder, Krisiun and Hatchet. Complete list of booked tour dates can be seen below.

Montréal based melodic death metallers Kataklysm will kick off the European leg of the Death... Is Just The Beginning tour with label-mates Hypocrisy and The Spirit this Thursday. Today, the band offers a new music video for "...And Then I Saw Blood" off of Meditations in celebration of the upcoming trek. Watch it here.

Last week, Montréal based melodic death metallers Kataklysm unleashed their new studio album, Meditations, through Nuclear Blast Records. A gift to the fans is the bonus DVD of the new album. This live DVD was filmed in Munich, Germany on the "A Moment In Time" tour on October 21st, 2017. Now the band has released the official live clip of the song "The Resurrected", taken from that DVD. Originally, it was the second song on the classic 2004 album Serenity In Fire. Check it out here.

Montréal based melodic death metallers Kataklysm are set to unleash their new studio album, Meditations on June 1st, 2018 through Nuclear Blast Records and have already shared the first single "Guillotine" before. Today, the band released their music video for their second single off the record. Watch the video for "Narcissist" here.

Kataklysm have finally debuted a new song! In anticipation of the release of Meditations, their first album since 2015's Of Ghosts And Gods, the Canadian death metallers have premiered "Guillotine". Meditations is due out on June 1st, 2018 via Nuclear Blast Records. Until then, you can enjoy the lyric video below. Are you pleased with the new track?

Kataklysm have completed work on their latest effort, Meditations, the soon to be released which consists of 10 blistering tracks. Produced by the band's own guitarist J-F Dagenais and drummer Oli Beaudoin, the record was mixed by Jay Ruston (Anthrax, Stone Sour). Meditations marks the return to old work ethics. All four band members wrote and composed together under the same roof for the first time in over a decade and returned to the old days of songwriting efforts. See the cover artwork, created by Ocvlta Designs by Surtsey, who also crafted the artwork for the previous record, Of Ghosts And Gods.

Kataklysm just shared several details regarding their new album! The Canadian death metallers also re-signed with Nuclear Blast worldwide. Today, the band also released an exclusive trailer announcing their upcoming album. Watch the trailer for Meditations, which is hitting stores near you on April 2018.