In a recent interview with 'The Metal Voice', Voivod guitarist Daniel "Chewy" Mongrain spoke about the progress of their upcoming fifteenth studio album, which is currently being written and will be their first since 2018's The Wake.

Voivod's live record, entitled Lost Machine - Live, has just been released via Century Media Records and can be purchased in its various editions here. The Canadian prog legends have now shared a live video mixed with some artwork animation, in which they perform the Killing Technology classic, "Overreaction". 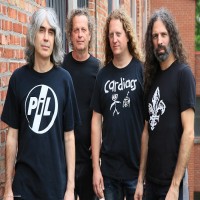 Canadian progressive sci-fi metal innovators Voivod return with a much overdue new live release. Dubbed Lost Machine - Live, the album was recorded in Québec City during the worldwide touring cycle for the band's latest studio album The Wake and will be released on November 27th, 2020 worldwide via Century Media Records. Lost Machine - Live consist of 13 tracks across 74 packed minutes of playing time. 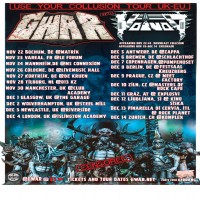 In the end of this year, American "monsters" Gwar and Canadian metallers Voivod will be heading out over the ocean to Europe for a string of tour dates. The 'Use Your Collusion European Tour' will begin in Bochum on November 22nd, and will be conclude in Zurich on December 14th, 2019. 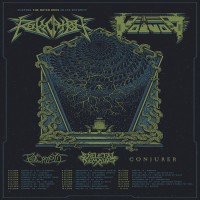 After recently completing US tour with Whitechapel and Dying Fetus, Revocation have announced another North American run for the fall, this time co-headlining with Voivod. This tour will also see Revocation play their latest album, The Outer Ones, in its entirety. Psycroptic, Skeletal Remains, and Conjurer will join the headlining duo as additional support. 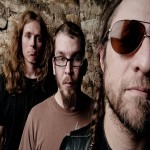 Yob will hit the road once again next spring for another tour in support of their latest album, Our Raw Heart. This time, the band is pleased to announce North American dates, also including Canadian veterans Voivod and Belgian quintet Amenra. Tickets (for select dates) are available at this location. All dates are listed below.

Voivod have released the third single off of their impending new studio album, The Wake. The Canadian progressive sci-fi metal innovators will soon release their new studio album on September 21st, 2018 via Century Media Records worldwide. Today you can hear the album's third single "Iconspiracy" in a video clip created by Costin Chioreanu/Twilight 13 Media, and watch it here.

Canadian progressive sci-fi metal innovators Voivod will soon release their new studio album, The Wake on September 21st, 2018 for via Century Media Records worldwide. The band has now released the album's second single "Always Moving". Check out the song in a clip directed by Eric Massicotte and Pierre Duplessis here.

The first single off of Voivod's new album is here and you can dive right into it! The Canadian progressive sci-fi metallers are about to release the new offering The Wake on September 21st via Century Media and today have unleashed "Obsolete Beings". The first single and video (directed and edited by Eric Massicotte and Pierre Duplessis) is for the album's opening track. Hear it now and tell us what you think.

Currently celebrating their 35th band-anniversary, Canadian progressive sci-fi metal innovators Voivod are pleased to announce a release date of September 21st, 2018 for their upcoming new studio album The Wake via Century Media Records worldwide. A first single outtake is expected for release on July 20th, so look out for that. In the meantime, check out the cover art and tracklist below.

Canadian progressive sci-fi metal innovators Voivod are not only celebrating their 35th band-anniversary, but have also just wrapped up studio-work for their upcoming new studio album entitled The Wake. Expected for a late September worldwide release via Century Media Records, The Wake is the highly anticipated successor to 2013's Target Earth album and the 2016 mini-album Post Society. The band also announced a European tour!

Canadian progressive sci-fi metal innovators Voivod will return to Europe one more time in September/October in order to promote their latest mini-CD release entitled Post Society before commencing work on their much anticipated next studio album. In conjunction with the European tour, the band will be releasing another strictly limited 7" EP in order to complete the vinyl-release of the 5 songs featured on Post Society. After having showcased 3 tracks on the split 7" EPs with label-mates At The Gates, Napalm Death and Entombed A.D., the upcoming 7" EP will be entitled Silver Machine and include both the Hawkwind cover-version that serves as its title track as well as the song "Post Society".

A new Voivod song has arrived. The Canadian progressive metal innovators are soon approaching the release of their new Post Society EP on February 26th, 2016 via Century Media Records. As of today, you can check out below the release's title track, one of the two new tracks featured on it. It's also a taste of what you can expect from their next album. Crank it up!