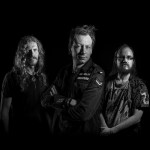 According to a press release, Metalmorphosized marks the 10-year anniversary of Iron Fire's crusade in the name of true metal. The Danish formation has not strayed from their steel-forging tradition, while delivering their latest collection of power metal hymns that will undoubtedly detonate like highly explosive dynamite in the ears of both avid headbangers and fans of the metallic art. Heavy guitar riffs, majestic melodies, and forward pressing drums build the foundation for mastermind and frontman Martin Steene's charismatic vocals. Steene even recruited former band members to celebrate this significant milestone with him. Each note, each riff, and each chorus echoes Iron Fire's resolve and convincingly shows that this band is armed and ready to fight for their metal ideals. A power metal opus par excellence!

Metalmorphosized will be released on the following release dates via Napalm Records: