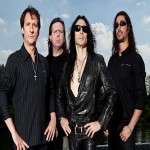 US metallers Virgin Steele are set to release their new album, The Black Light Bacchanalia, via SPV/Steamhammer on the following dates:

The new album will be available as a limited-edition digipak, standard CD, double gatefold vinyl and as a digital download.

Commented vocalist David DeFeis: "It will be a long album... close to 80 minutes. The album (to be really brief) concerns the reversal of all things. Once conquered by invading cultures, older Pagan deities become the demons of the new religion. The Black Light Bacchanalia is a reversal of the sacred sexual customs, and the final desecration of the "Goddess Principle", switching from matrilineal descent to patrilineal descent, with the rise of the idea of the Mountain-Fire God.... And it also has to do with ancient fears such as the fear of the sun not rising... Lyrically it is a kind of continuation of the story I told on the last album... Musically it is quite something else..."


Songtitles set to appear on The Black Light Bacchanalia CD include: