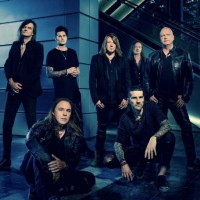 From today on the front cover of the new Helloween album 7 Sinners is unveiled!

End of October, just on time for Halloween, the long-awaited album 7 Sinners will be released.

It is the 13th studio album of the German heavy-metal legend Helloween. Certainly not coincidental the new record is in equal shares the fastest, hardest and most melodic piece of work in the bands history.

The line-up around singer Andi Deris, guitarist Sascha Gerstner, drummer Dani Löble, as well as the two founding members, guitarist Michael Weikath and bassist Markus Grosskopf, is more than intact and the countless tours and festivals boosted the bands self-confidence, which clearly becomes apparent in the new songs.

About a month after the release of 7 Sinners the band will be on the road to tour the world again... watch out for the dates!