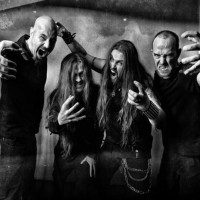 Dutch Death Metallers God Dethroned recently finished the recordings for their sophomore new album Under The Sign Of The Iron Cross. The band's 9th album has been recorded at Soundlodge Studios in Leer, Germany.

Comments singer/guitarist Henri Sattler: "Just like with our two previous albums, we've been recording at the Soundlodge Studio's in Leer, Germany with producer Joerg Uken. Under the Sign of the Iron Cross is another concept album about World War One. Having done a concept album about this topic before didn't make it an easy job, but reading Ernst Juenger's "In Stahlgewittern" (Storm of Steel), which is his biography of his daily experiences in the trenches during the war, gave me so much inspiration that I managed to do a good job on the lyrics and I'm really satisfied with the result, but this is of course something you will have to check out for yourselves.

Musically the new album turned out to be one of the most extreme records we ever did. Nevertheless with the very recognizable God Dethroned hooks present in all the songs. Producer Joerg Uken outdid himself this time, because our new album is in my opinion the best produced album we ever had. Extremely raw, heavy, but crystal clear and super dynamic at the same time."

Under The Sign Of The Iron Cross will be released the 19th/22nd of November 2010 via Metal Blade Records in Europe and on the 23rd of November in North America.


Under The Sign Of The Iron Cross [cover art] tracklist: