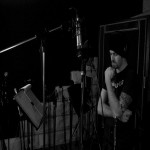 Chris Torpy, vocalist for Australian post-metal band We Lost The Sea, has taken his own life on Saturday morning, according to the band.

Band's full statement posted on their Facebook page: "Sometime early saturday morning, our brother, singer and best friend, Chris Torpy, took his own life. We cannot adequately express the loss, and the hurt we are feeling at this time. And in no way ever presume to understand what his family are going through right now.

Chris was the soul of the band from the very begin, he was a true artist, an amazing lyricist and the best vocalist I have ever seen. He was genuine and loved his friends, he was a better friend to any of us than we deserved, and he was always the first to reach out to people who were hurting. He struggled with his demons for a long time, he used music as a way to exorcise them, sometimes we could really hear the pain and fury in his voice at practise or at a show. He always lived life to the fullest and pushed the boundaries of his own existence. These words feel cheap, and don't in anyway do his remarkable, although short, life. He will be missed by many, but never forgotten. We Lost The Sea are blessed to have his talent and his voice recorded for us to always remember him as he was, for who he was.

We Lost The Sea at this stage will NOT be pulling out of the This Will Destroy You show at the Annandale. We would like to play this show to honour our fallen brother. Whether or not we are able to do it remains to be seen. We have not talked about or made any decisions about the future of the band after this show. Chris is irreplaceable, but I know he wouldn't of wanted the band to stop. So I personally will be looking to making more music in his name.

Chris we will always love you and I feel that the best way to pay tribute to you is via your own words. Much Love. Mark, Nathaniel, Turtle, Brendon, Kieran & Mathew and all the We Lost The Sea family."

The band had recently released their second album The Quietest Place On Earth last December.

[Also thanks to BoxCar Willy for sending in this news!]