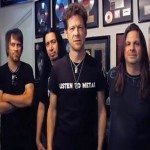 In the continuing saga that is the Australian Soundwave festival for 2014, it now seems that Newsted have also decided to cancel.

The ex-Metallica bassist Jason Newsted has posted a brief statement on his Facebook page, taken down later, saying that the Newsted band will not be performing live in February and March 2014, without going into any detail, or even apologising to the fans. Outside of the festival, Newsted were playing two sidewave shows with thrash titans Testament in Melbourne and Sydney.

Soundwave promoter AJ Maddah said yesterday he was trying to figure out what was going on with Newsted, and stated that his gear had already arrived in Brisbane. Today he tweeted: "I am heartbroken that @JasonCNewsted will not be joining us at #SW14. We both look forward to bringing you a headline tour later this year." He also says Amon Amarth, Testament and The Black Dahlia Murder will play 10 extra minutes to compensate for that. The Testament sideshows will go ahead with replacement supports.

This has been the worst year for bands pulling out of the Soundwave festival, with Megadeth pulling out last week, Whitechapel being forced to cancel on Monday for family reasons, and Hardcore Superstar saying "only days before our flight, changes were made and placed HCSS in a spot that was too far away from our original agreement."