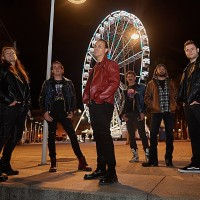 Labyrinth haven't released a new album since 2010's Return To Heaven Denied Pt.2 but that is about to change. The power metallers are working on new songs and have also welcomed Mark Boals (Yngwie Malmsteen, Royal Hunt, Iron Mask) as their new vocalist. Roberto "Rob Tyrant" Tiranti has left the band after almost 18 years as their frontman to start a solo career.

The band explained: "As everybody already knows, Roberto has decided to part ways with the band in order to start his solo career. We wish him all the best and we thank him for the long walk we have had together. At the same time 'the show must go on', as somebody said, and the good news is that we have started working on the new album. This is not the only good news, anyway, 'cause we are incredibly excited and honored to announce that our new singer is none other than a top-notch artist and a piece of history in the metal world: we warmly welcome Mr. Mark Boals on board and we can't wait to let you all listen to some of the new songs we are working on! Sincerely yours, Labyrinth."

Roberto Tiranti's statement: "It is never easy to write this kind of public statements, but I think it's fair to be clear and sincere towards those that for many years have granted us esteem and love. From now on I am no longer the singer of Labyrinth, after almost 18 years I leave the band that more than any other has given me in terms of satisfaction, blazon and experience in Italy but even more abroad.

"6 albums, an EP and a 'Best Of', a lot of music written all together with a common goal, so much life shared that cannot be wiped out and the awareness of having friends I can count on and hopefully meet again in the future to write other music together. Everyone is useful, no one is indispensable and I think that also this time the band will be able to face this with the usual strength and ability to reinvent itself. I've had the best band I could have had to express myself in that field and I'm sure I won't ever be part of any other band of similar type, it would be stupid, incoherent and unfair to Labyrinth. At the moment I'm working on my first solo album on which I am spending a lot of energies, moreover the collaborations with Ken Hensley, Wonderworld and Mangala Vallis keep going on. My priorities obviously go to my solo project, in order to create a firm-based foundation for the future. Thanks to Labyrinth. Thanks to you all."