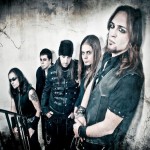 Dawn Of Tears have bad news for their fans. They are on hiatus as of now. While the Spanish melodic death metal band has only released two albums so far, Descent and 2013's ACT III: The Dying Eve, they have decided it's time to take a break and also announced a new project.

Here is vocalist's Jesús Alonso statement: "Hi, folks: After 15 years of history, Dawn Of Tears have decided to take a much needed rest. We want to give thanks to everyone who supported us during this time, and yet, given unforgettable moments that we will keep forever.

"We cannot say we will return to the stage or to studio at a concrete date, now it's all in the air, but when we make decisions, you will be notified as soon as possible. In addition, we announce a new band project of which we are now part of it, I. Perez and me, Die II Reborn. We take this opportunity to invite you to see our first video and meet us here. Thanx for your attention and hope you like it, ¡Metal Power!"