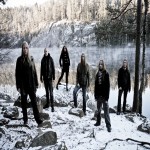 Noumena is about to re-release their second and third albums, Absence and Anatomy Of Life on April 29th, 2016. The albums will be released in a double CD digipak with five bonus tracks previously available only on digital format. The digipak is reissued by Haunted Zoo Productions. Currently, Noumena is working on new songs and getting ready for studio sessions. The band's next album will be released by the end of 2016.

Absence (released in 2005) was widely acknowledged, and it was followed by band's third album Anatomy Of Life on the following year. These Spinefarm-era albums defined Noumena's sound and style and enriched the melodic death metal genre.

Comments Hannu Savolainen, the head of Haunted Zoo Productions and bassist of Noumena: "We decided to celebrate the 10th anniversaries of both the albums with this special release. Both the albums have been out of stock for several years, so this also is a favor to our fans. Five bonus tracks from original studio sessions are included on the digipak, and those songs have earlier been available only on Triumph And Loss digital EP."