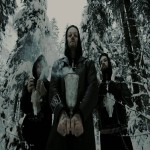 Russia hasn't exactly been very friendly to certain metal bands, including Cannibal Corpse, Behemoth and more recently, Batushka as well. The latest victim was Belphegor, more specifically frontman Helmuth "Hel" Lehner who was spat on and attacked by a Christian Orthodox activist, Anatoly Artyukhov, at the airport in St. Petersburg in Russia. Belphegor arrived for a tour with Nile and Melechesh. You can watch the incident on the video below, where Nile's Karl Sanders helped calm down the situation.


Artyukh reportedly later claimed that Lehner assaulted him after mistaking his speech as aggression, a charge denied by a representative for Infinity Concert, which organized the St. Petersburg concert. "It's all lies and slander," the representative said. "There are surveillance cameras that captured the incident. We, most likely, will file a complaint with the police for hooliganism."

He also stated that there was a group of Christian activists picketing the arrival of the band because of their Satanic lyrics and ideology.