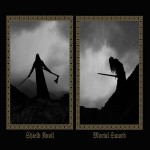 After a relatively long silence, here is finally some news from the Caladan Brood camp. The epic black metal duo from the USA is working on the follow up to their mighty debut, Echoes Of Battle. As of yet, there are no further details about the new songs, but the band recently recorded a cover of the Summoning song "Farewell" from Let Mortal Heroes Sing Your Fame. This track was recorded especially for the Summoning tribute 3CD box set In Mordor Where The Shadows Are - Homage To Summoning to be released by Wolfspell Records on 15th of December. You can check out this cover in the video below as well as the preview of all other songs on the compilation.

Commented the Caladan Brood members: "It has been some time since we last broke the silence on this page. Since we have a Summoning cover featured on an upcoming tribute compilation, we would like to take this opportunity to post an update on our activities. This will be something of a lengthy post; the first half will cover the status of Caladan Brood as a project, and the second half will shed some light on the circumstances surrounding the recording of the cover of 'Farewell' we contributed to 'In Mordor Where the Shadows Are - Homage to Summoning'.

"Firstly, we would like to address a question we have seen posed often in messages and posts on our page: yes, new material from us is on the horizon. We are writing and recording. We are active. Both of us are always very busy juggling a variety of musical projects, but Caladan Brood is important to us and we are slowly but surely forging original material.

"Regarding our participation in this Summoning tribute compilation, we would like to first and foremost thank Wolfspell Records for asking us to contribute. We only discovered the invitation a few weeks ago, but we decided to agree to record a cover in spite of the imminent deadline. As a result, this is by far the fastest any of our recordings have ever come to fruition. The cover was learned, recorded, engineered, and mixed in its entirety at Shield Anvil's home in just two sessions, and mastered by Dave Otero in a matter of hours. It was a whirlwind project completed white-knuckled and with gritted teeth, but it was a great exercise in stretching our legs insofar as moving a recording from concept to completion goes. We are looking forward to applying this energy toward finalizing some of the original material we have been chipping away at."