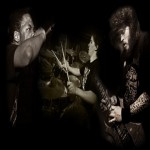 Prog/tech death metallers Gigan are back with a new album! Following up on Multi-Dimensional Fractal-Sorcery And Super Science, the new record also has a long title: Undulating Waves Of Rainbiotic Iridescence. It will be released September 15th, 2017 on Willowtip Records and as of now, you can listen to "Plume Of Ink Within A Vacuum", the first taste of new music.