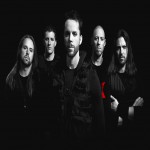 Seventh Wonder have finally announced the title of their new album. The band fronted by Tommy Karevik (Kamelot) have previously released a few new singles. The progressive metallers fifth studio album will be called Tiara and it will be a 13-track concept album. The full statement from their Facebook page is below.

Seventh Wonder announced: "Dear friends, It is with great pleasure that I can share with you this exciting news: Seventh Wonder is back with their fifth studio album, titled Tiara. The new album is now in the final stages of mixing, and it is being mixed at Lionheart Studio in Oslo, Norway by Oyvind Voldmo Larsen (who also mixed Inner Enemy and The Promise).

"It is the first studio album to feature Stefan Norgren on drums, and in two weeks the album will be passed on to Jens Bogren of Fascination studios for mastering. Jens has previously worked on albums by Symphony X, Katatonia, Opeth and James LaBrie. The 13 tracks of this concept album will visit some new sonic spaces for Seventh Wonder, while staying true to their form. After the mastering, the finished album will be delivered to Frontiers Records for a world wide release."

"We've watched you since the dawn of time,
with every moment gone by.
A million suns fade and die,
this is the end?"
Beware, for they're coming….!
#Tiara
//Arjan"