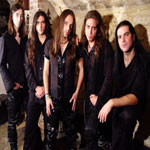 "Archangels In Black" will be the name of the new Adagio album! Stephan Forté has already composed almost all songs and annouced that the album will feature 9 songs + 1 Japanese Bonus track.

Recording sessions will start at the beggining of October.