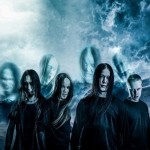 Finland's extreme power metal team Frosttide announced that their new, yet untitled, album will be dropped sometime next year. You can check out the first single ''We Will Be Gone'' below.

"The song is inspired by all existence and its meaning to an individual, viewed from a rather objective perspective. As in a bigger scale and over periods of time, the impact of one's life eventually fades away. Grasping that makes you realize that everything is temporary hence all that matters is happening right now. The stories vary, but in the end of the day we're all alone with our memories right now and we can only imagine what comes next no matter how calculative we are. Only one thing is certain in the end. Like mentioned before everything is temporary. Someday everything will be gone just like it didn't exist before. We will be gone."

Stay tuned for more tracks and updates from the new album coming in the near future!