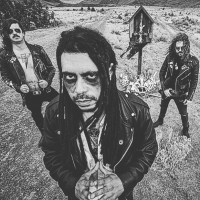 "Satanic Magick Attack", the first song from Bewitcher's upcoming studio album Cursed Be Thy Kingdom, has been released. The new music output is set for release on April 16th, 2021 via Century Media.

M. von Bewitcher (vox & guitars) comments: "The devil's rock n' roll is alive and well, its flames kept burning bright by its devoted legions. The battle lines are drawn, the declarations have been made. When the shock troops of hell finally charge over the top, there will be no escaping the attack!"