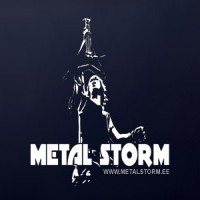 Another February has been remanded to the custody of memory, and one of the most exciting editions of the Metal Storm Awards is now naught but a matter of record. The MSAs continue to expand slowly; if we can just pull Symphonic up to ten nominees next year (and we'll make an effort, we promise), we could hit a full 260 nominees in total (272, counting the Clandestine Cuts). We'll see how things go, but for now, thank you once again for taking the time to listen, vote, and enjoy all this music with us. Discuss the results below.