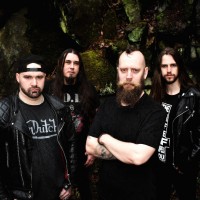 It's been only a month and a half since Evile released their latest album Hell Unleashed, which marked their first in 8 years and the first one with guitarist and founding member Ol Drake filling in for his brother Matt on vocals, following the latter's departure from the band last August. However Evile don't seem to be slowing down at all, as they already have made plans to start working on their sixth studio album later this year.

Frontman and lead guitarist Ol Drake tells Metal Hammer: "I started writing the next album before [Hell Unleashed] was even finished. New material will probably start in late 2021."