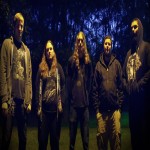 American death metal formation Inferi are pleased to announce the release of their fifth full length instalment, entitled Vile Genesis. The record was produced together with Dave Otero. It drops on September 10, 2021 via The Artisan Era.

Inferi commented: We are beyond excited to finally announce Vile Genesis as our fifth full-length album! This time around, we had the honor of working with legendary metal producer Dave Otero who helped take our production to the next level. And once again, we have the brilliant artwork of Helge C. Balzer that captures the story perfectly with visual eye candy. Stay tuned as the first single from the album drops tomorrow!