Show more
Metal Storm Next, The Forums And You
News index | Most popular | RSS feed 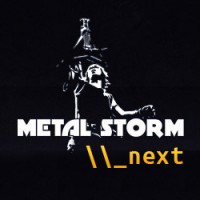 So Metal Storm Next has seen our code jockeys spend incredible amounts of time trying to update the entire infrastructure of this site to catch up with the modern age. Toss a coin to your code jockeys, oh metalers aplenty.

One thing we won't be updating is the forum.

The current internet is slick, soulless and designed to toss the maximum amount of ads your way (while mining your interests to sell to the highest bidders) and shielding you from the content you want to see. Forums have died in favor of social media platforms where if your thoughts are longer than what might fit on a bumper sticker in 128 size font, it's TL'DR and you'll get dogpiled on by random people for having an opinion that differs from what they deem is correct.

Our forums are old. Not as old as me old, but still mighty old. They come from a bygone era. Take it away, Douglas Adams:

We aim to keep it that way. The forums help us retain a community across the globe. I know this firsthand, having met up with and knocking back cervejas with MS members over said globe - US, Netherlands and Chile if scoring at home. I have found new music here, I have made friends here and I imagine I am not alone in this, most of you likely have as well.

The forums are a key component of our unique identity and spot on the internet. And we aim to protect this.

In discussion during our latest Ice Cream Social (code word for 7 hour boozefest while talking shop) at the MS Towers, we all agreed this is paramount. We want to do what we can to retain existing users as well as attracting new metalheads and having them stick around.

So grab a bevvie (or an ice cream), buckle up, buttercup, and read on.


Metal Storm is NOT A Free Speech Zone. Not absolutely. So no fucking whining about it.

If you come here and and want to talk metal or associated topics while treating fellow users with respect, we'll not have a problem. Hell, should you be a swell enough person and Covid ever goes away, I might even meet up and knock back beers with you. (Actually, depending upon your tolerance, that may or may not constitute a problem, but at least a fun problem. And an evening that might culminate in you spewing completos and cerveza all over your city's sidewalk.)

If you come here and start personally attacking other users and dropping the kinds of racist, sexist, xenophobic, whatever kind of language that if you used on the street in real life you'd get punched hard enough in your piehole to spew forth teeth like a piñata does candy, well, we'll do that to you digitally. Whether it's me and my claw hammer, Troy and his favorite hockey stick or Nikos wielding Hercules' great club.

If you are a douchebag bent on being divisive or argumentative for being a troll's sake, you are not worth the users your behavior might chase away. The community, and thus community health, is more important than you.

Our hierarchy of actions moving forward.

Nothing is set in absolute stone like Moses and those tablets in terms of actions we will take, we will take action based upon the severity of the violation combined with things like past history.

If you are a good citizen of Metalstormistan, have been a forum user for many years, have a shitty day, get drunk, log on and call me an asshole in the forum, one of the other mods (not me, as I will recuse myself) will pull you aside by private message and treat you like the Roman Centurion did Brian of Nazareth: If you have a rap sheet of past infractions that reads longer than Iron Maiden's discography, we might skip a step or two even if you've been well behaved in the recent past.

If you show up and go off like a hand grenade with invective language shrapnel hitting any user in the adjacent forums, we're not going to debate, but Troy, Nik and myself will combine our Super Mod Powers like Voltron or Captain Planet and wipe you from the MS Space Time Continuum before heading off to the pub for several rounds of cold ones to later piss all over your ashes.

In closing, there SHOULDN'T be any problems. The only thing you as a user are being asked to do is don't be too much of an asshole. I know, I know, this is the internet circa 2021 and it a bigger ask than it should be, but that's it. If you respect your fellow Metal Stormers and treat them in the way you want to be treated yourself, we will all be a happy family in which everyone will feel accepted and welcomed. We want to have a community that embraces everyone who wants to be included and has good manners. We appreciate people with a sense of humour but do remember that harassment based upon race, colour, ethnicity, national origin, religion, disability, sex, gender, expression, gender identity, or sexual orientation will not be tolerated.

Go forth, enjoy the metal, enjoy the forums and, take it away Bill S. Preston, Esq. and Ted "Theodore" Logan