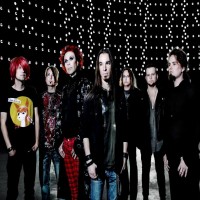 Waltari are present at the Finnish rock/metal scene since 1986, and their first release was a self-titled EP back in 1988. However, they consider Monk-Punk as an album that defines their style, so that's why their newly announced anniversary album is entitled 3rd Decade - Anniversary Edition. It consists of re-recorded songs from their previously released albums (as well as remixes & new track), featuring several guest musicans with whom they collaborated for this special release.

Here's a statement from the band: "Dear fans and friends, we've news: New album that includes our biggest hits re-recorded with many guests out on November 26th, 2021!

"For Waltari, this space has always been music - galaxies of sound beyond tropes and trends - and in 2021, we are celebrating the 30th anniversary of their very first space journey in true style.

"This means that even though a best-of compilation might be in order on such an occasion, we weren’t ourselves if we hadn't cooked up something special. We noticed that 30 years have passed since Monk-Punk – and here new are, with a specialty, honoring this anniversary.

"We revisited material from all creative phases, choosing some of our finest songs (plus one new track) to give them an overhaul with the help of like-minded musicians from every stripe. Be it Sami yoik duo Angelit or electro hip hop stars Bomfunk MC, German industrial pioneer Jürgen Engler from Die Krupps or other countrymen of ours such as former Nightwish bass player and vocalist Marko Hietala, humppa legends Eläkeläiset official as well as Korpiklaani front man Jonne, The 69 Eyes singer Jyrki, German crossover newcomers April Art, Mr. Lordi himself and his band plus members from Skyclad, Amberian Dawn, Hanoi Rocks, Negative and Beast In Black.

"On Nov 26th this fall the time will have come for this fine piece to hit streets, until then we’ll have to stay patient, however, we already can promise some upfront singles to come sooner (bear with us until early October for the first one!) and surely more news to be shared shortly!"

Track listing is as follows: