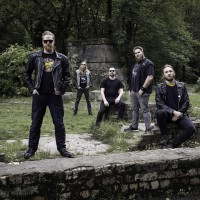 Statement from the band regarding the David Connolly departure ''Unfortunately David has decided to step down from Farseer. We've known about David's decision for some time and fully understand his reasoning behind leaving and support him fully. David didn't join Farseer but helped forge it and in his many, many years we've been honoured to share the stage with him. His songs, energy, ability to throw himself fully into anything we did and shit jokes have been a staple part of the band and he will be greatly missed.

David Connolly comments about his departure: "It is with sadness I must announce today my departure from the band I have been in for nearly 14 years. It has not been an easy decision to make but my availability and appetite for playing live has waned in recent times in favour of family, professional and other pursuits. I will still be working on the odd project now and then from home or in the studio but in order to allow Farseerto progress and continue with live shows and touring (now that gigs are coming back) it is best that I stand down to allow another to step in.

"Gigging with the band has taken me to many places around the UK and met many cool people along the way and great stories to recall. The one gig I think I enjoyed the most was supporting Thunderstone in Birmingham followed by the aftermath of opening for Freedom Call in Glasgow.

"The second Farseer album is close to completion with all songs recorded and mixed and I cannot wait for you guys to hear it. What’s more I am looking forward to hearing what the new lineup will produce in the near future and supporting them in the advance. Thanks to all that have supported me along the way and I’ll see you soon in adventures to come."

About Baz departure, the band saysthe following: "So we did say a couple of sad points today didn't we? Baz has also made the decision to leave Farseer and, for the time being, live music as a whole due to health concerns. While this came as a shock we couldn't support Baz more in his decision. At the end of the day health, and specifically hearing, is vastly more important that flailing your limbs around on stage. Baz has been an integral part of the band for as long as we can remember and his infectious energy and enthusiasm spurred us all on. He will be missed (especially the way Baz could turn any pizza into a calzone if he tried hard enough).

Barry "Baz" Fitzsimmons comments: "It is with sadness that I am announcing that, after about six years all in, I am leaving Farseer. Having played in metal bands for the best part of the past 20 years without the proper protection, my hearing has started to suffer. With gigs returning and regular rehearsals required for the band to dust off the Covid-cobwebs, I don't feel I can risk damaging the hearing further. I've always hated what earplugs do to the sound and vibe of a rehearsal, but in hindsight I'd recommend them if you don't use them already!

"I've had so many great times with Farseerover the years. Supporting Riot and Ross the Boss were highlights for me, and our gig in Newcastle with Midnight Force and Rabid Bitch of the North proved that I wouldn't survive long on the road!
I am immensely proud of the new record, and I'm sure you're going to love it. It was a labour of love through the lockdown, and I think everyone plays a blinder on it. I can't think of a better way to sign off!

"Will there be other bands I end up gigging with once in a while? Maybe. Maybe not. Will there be other recording projects? Definitely! But there will only ever be one Farseer Thanks for the beers and cheers, much love to Micah, Bisset and Alasdair!"