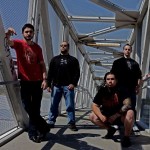 After more than half a decade of inactivity, vocalist and bassist Andre Hartoonian confirmed in a recent interview with The Metal Crypt that Hexen has risen once again. He revealed that there will be a new album, which will be the band's first since 2012's Being And Nothingness, and a new lineup is in progress, with plans to promote the record with live dates.

On the band's long-awaited third album, he said: "HELL yeah...!! Hexen will be back and it's now or never. With the reissues coming out, I'm recruiting members for a new lineup for the third album. We're only going to have this one chance at reissuing our albums and I don't want to lose this chance at a third album WHILE there's still buzz. Even though our absence the past decade has shown that even when Hexen goes away, Hexen's never really gone because people still cherish it and listen to it from time to time. That's why 2021/2022 are going to be some great years for all our old witches and warlocks out there."

When asked who's part of the reunion, Hartoonian elaborated: "When I finally secure a steady one, you'll be the first to know. I'm meeting and jamming with all kinds of guitarists as we speak. For some reason, it has NOT been easy, and again I attribute that to not being high school age anymore. Everyone's got bills and problems and lack of time. But at the moment, I am the only 100% member of Hexen. Carlos already stated that he's way too busy to drum for yet ANOTHER band, and one that doesn't pay as much as the others at that. So, I basically need a whole new band. I need two rhythm/lead guitarists and a drummer. Yep, starting from scratch again but hey you have to start somewhere..."