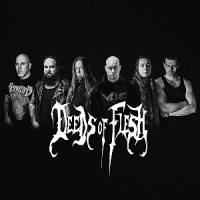 Technical death metal pioneers Deeds Of Flesh unveil a classic line-up, with the return of long-time drummer Mike Hamilton. Mike's drumming style has been a huge staple in shaping the band's sound and laying the blueprint for the future of technical death metal. Jacoby Kingston will return to bass and vocal duties as he has done during his entire tenure with Deeds. Ivan Munguia will make the move from bass over to second guitar, an easy transition given his recent guitar work live and in the studio with Continuum.


Going forward, Deeds Of Flesh are:

The band comment: "We want to thank Darren Cesca for all of his hard work on our most recent release, Nucleus. That album would not sound the way it does without his stamp on it. Darren is one of the most professional and skilled death metal drummers out there today and we guarantee you'll be seeing him continue to push the envelope for the genre and drumming as a whole. We're very proud to have Darren as a part of the Deeds legacy and wish him all the best and a future of success!

"Although we wish we could be hitting the stage with our brother Erik Lindmark, we feel going forward it would be best to retain the classic Deeds line-up as much as possible."


Mike Hamilton commented: "I am very excited to return to my rightful home as drummer of Deeds Of Flesh. I thought the opportunity of performing live with Deeds Of Flesh would never present itself after the unfortunate passing of our brother Erik. I am honored and stoked to be reunited with my incredibly talented brothers Jacoby, Craig and Ivan and look forward to performing at Hellfest 2022 as well as writing new material for future releases!"

Jacoby commented: "Though I am saddened that Erik won't be with us, I feel honored to regain bass and vocal duties and am excited to be jamming once more! 2022 is going to be an amazing year for the band and we look forward to crushing skulls once again."

Darren commented: "Working with Deeds Of Flesh is something I’ll always be proud of. When originally approached by Erik and the rest of the guys to join, the answer was undoubtedly yes. The band has an unmatched legacy in the history of the genre and it’s great to be a part of that. I approached Nucleus just as any other album by crafting drum parts to enhance and push dynamically what the band is capable of. At many times along the way we didn’t know if Nucleus would see the light of day, but nothing could stop its eventual release. It’s a tribute to Erik and needed to happen. As the band moves forward, I thank the guys for their efforts and comradery. While the circumstances are a bit bittersweet, I wish them the best going forward and am happy to have left my mark. For the future I will continue to do what I do best, work with other talented bands and artists while making heavy, extreme music!"