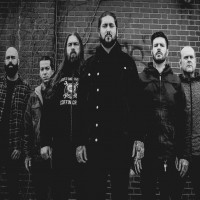 Deathcore six-piece Fit For An Autopsy proudly announce the release of their sixth full-length album, titled Oh What The Future Holds. The record arrives on January 14, 2022 via Nuclear Blast Records. "Far From Heaven" single serves as the first taste of what to expect. It's available for streaming with accompanying music video, directed and edited by Eric Richter.

"This song felt like a worthy introduction to premiere the album, picking up where we left off creatively from our last release," the band says. "Although there are more drastic dynamic turns on the new album, "Far From Heaven" delivers from a more simplistic and primal place. Lyrically, this record digs a little further into internal turmoil as well, but this song is in a way a much more literal and grounded representation of our continued frustration with institutions and class gaps that exist in all facets of society. The powerful video, directed by Eric Richter, is a great thematic visual counterpart to the inherent dark nature of the song. Hope you enjoy it - we certainly do."