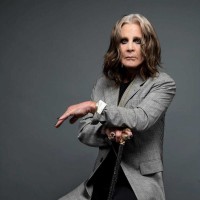 In a recent episode on Ozzy's Boneyard, Ozzy Osbourne revealed that he is working on his follow-up to last year's Ordinary Man, which will include guest appearances from iconic guitarists such as Jeff Beck and Eric Clapton, as well as his longtime guitarist Zakk Wylde and Black Sabbath bandmate Tony Iommi. This will be the first time since Black Sabbath called it quits with farewell UK tour back in 2017 that Ozzy and Iommi have worked together.

Confirming that he is once again working with Post Malone producer Andrew Watt, Ozzy said: "On this new album, I'm working with Jeff Beck, Eric Clapton, Tony Iommi, and Zakk [Wylde]. You just write the song and you just ask them to sing [or play] what you [give them]. The good thing is it's interesting to work with somebody else. But the bad thing is - if it don't work, you can't [just let it go] 'cause they'll get all pissed off."

On Clapton's contribution to the record, Osbourne stated: "Eric Clapton, on this new record, one of the lyrics was about Jesus, and he wasn't sure about that. But it was all right in the end… [The solo he did] is very good."