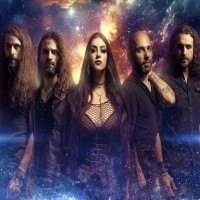 "Breaking The Rules Of Heavy Metal", the second single/video from the next Temperance record Diamanti (out on November 19th via Napalm Records), has officially premiered online.


Michele Guaitoli (vocals, piano) on the new single: "If there is one thing that makes Temperance unique on the scene, is that we just don't care about any commercial rule. We write our music for how we like it. We don't ask ourselves "will this work?" We don't question our songwriting putting it in relation of the market.

"This attitude is the same that we have when it comes to accepting limits: we don’t accept the idea of having limits. We are here to break the rules. Why just one singer? Let's have three. Why just a style? Let's play many. If we want something, we fight for it even if we need to break the rules of a certain scheme. What about heavy metal? Does it have rules? Does it have a scheme? If yes, we’re here to break it."