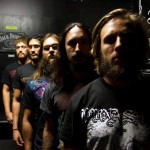 To celebrate a 10th anniversary of their debut EP A Universal Plague, tech death metal/deathcore purveyors Abiotic announce the re-release - A Universal Plague: Mutation. This version consists of all 7 original tracks, the re-recorded track "Vermosapien", and a brand new one called "Mutation". The latter, which can be heard below, features Abiotic's former vocalists Dickie Allen and Ray Jimenez.


Statement from the band: "We're so grateful to get to celebrate the 10th anniversary of our debut EP release with the re-release of A Universal Plague: Mutation. Fans have been asking us to release the EP digitally and on limited edition vinyl for what feels like forever and we're so pumped to be working with The Artisan Era to get this out to everyone with some bonus tracks for the fans. We decided to re-record the song that started it all for us, "Vermosapien", with our new line up and make some creative tweaks, including using 8 strings, to give the song new life, while keeping true to our original sound. The idea was to show the mutation we've made as a band, hence the name of the EP. We also added a brand new song, featuring our former vocalists Ray Jimenez and Dickie Allen, which is easily the heaviest song we've ever written. I think fans are going to lose their minds to this song, hearing the blend of voices that have been part of the band's 10 year span of plaguing the extreme metal scene. We tapped Caelan Stokkermans, the cover artist for Ikigai, to pay homage to the original art on A Universal Plague, while showcasing our new artistic visualization for the band. A huge thank you to everyone who has supported the band over the last decade. We are only able to do what we love to do because of you."