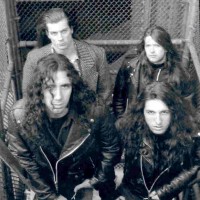 It is with tremendous sorrow that the members of Revenant, a New Jersey-based death thrash metal band from the 80's/90's, mark the passing of William "Will" Corcoran (1968-2022). More can be read below.

Will was raised in Teaneck, NJ, where he joined the band Lacerated in the mid-1980’s. Lacerated played clubs in the North Jersey scene and recorded one demo. Henry Veggian would sometimes join the band onstage to cover Slayer songs, splitting verses with Lacerated singer Anthony Kingslow.

Will joined Revenant in the summer of 1989. His impact was immediate. Technically proficient and creative in his approach, he added a new dimension to the Revenant sound. In the fall of 1989 he played his first show with the band, when Revenant and Immolation opened for Napalm Death at their first U.S. show.

Will made his first recording appearance with our band around that same time, on the third Revenant demo, a 3-song recording that included a new version of "Asphyxiated Time", "Degeneration," and "Distant Eyes." Those last 2 tracks were released as a 7 by Thrash records in 1990, and announced the start of the band’s longest and most successful period. Between 1989-1995, Will played drums on two more demos, an e.p. & a studio album, performing in over 100 concerts in Europe and the United States along the way.

Will was a fan of all great drummers, and he counted the legendary prog rock drummers among his favorites. One was closest to his heart, and that was Neil Peart, a drummer who Will studied and listened to with immense devotion. Anyone who spoke with Will knew that he loved talking about his craft, and he would have long conversations with other drummers in the local scene. Among them, Brandon Thomas of Ripping Corpse and Dave Witte of Human Remains were among his favorites, as he admired their technique and shared their passion for the art of extreme metal drumming.

Will was our drummer, our brother and our friend. Over the course of 9 years that Revenant was active, a total of only 9 musicians played in our band (3 drummers, 3 bassists and 3 guitarists). We all remained in touch when a band member left the group. Will’s passing is particularly painful because he is the first of us to shed this mortal coil.

We ask that fans of the band honor him by cracking open their favorite drink, picking a favorite Revenant song and playing it so loud that Will can hear it shaking the walls in Valhalla.

Will is survived by his wife, Kristine Corcoran and his brother, Ed. Rest In Peace, Brother.