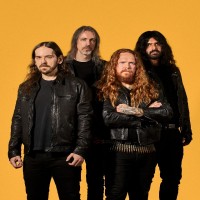 San Francisco bases blackened heavy metal outfit Nite will be releasing their sophomore full length, Voices Of The Kronian Moon, on March 25, 2022 via Season Of Mist. The band have partnered up with Metal Injection to premiere their brand new song/video, "Acheron". Video created by Guilherme Henriques.

Nite mainman Van Labrakis comments: "'Acheron" opens our upcoming album and introduces us to the world of Kronian Moon. It's our take on the myth of the ancient river, where Charon led the souls of the dead past the gates of the underworld. In this case the Acheron river is a journey through space and time. A transformation and the beginning of a journey in an ancient alien world."