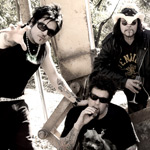 Ministry have released a brand new video for the song "Believe Me", which appears on the band's latest album Moral Hygiene. The video clip was a departure from the two previously released professional videos from the album and became a total DIY effort, with each of the band members (also including drummer Roy Mayora, guitarists Cesar Soto and Monte Pittman, bassist Paul D’Amour and keyboardist John Bechdel) gearing up for the upcoming tour at home and purchasing an inexpensive green screen to contribute their parts to the performance footage that was then melded together.