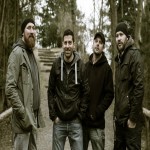 Germany's stoner/post-rock mainstay My Sleeping Karma reveal the tracklist, artwork, and release date of their long-awaited sixth LP, their first in seven years. The album is titled Atma, and to whet your appetite, they band also release a music video for their first single called "Prema".

The album is scheduled for release through Napalm Records on 29 July, with pre-orders available for marbled blue and glow in the dark edition vinyls.

In the announcement on their Facebook page, the band says: "Many of you know about our difficulties in the last years, and honestly we never thought this record would see the light. Atma is our deepest and most emotional album, and it surely would have not been possible without your endless support throughout the years. We will give you more detailed info about the album, concept, videos, artwork one after another. Now enjoy our music video for the first single "Prema"."