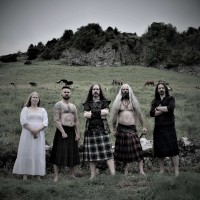 As reported previously, Irish-based metallers Cruachan had announced that their next studio album was supposed to be entitled Forest Songs. Now, they have decided to change it to The Living And The Dead. You can read their explanation below.

Statement from the group as follows: ''Guys, the new album will be called The Living And The Dead. We got the title wrong with 'forest songs' and decided to change it. The more we worked with the songs the more we realised the title didn't fit. We were putting down some vocals last night, the theme of the song, like all the songs on the album, involves death in some way and Mick, our producer turns to us and asks 'why is this called forest songs' ... that was the last straw haha. We had a few titles we were thinking of and The Living And The Dead was a close second, now we know it is the best title. Without realising it, we have made another concept album, and the theme is death .... death and rebirth. No release date yet, still in production.''