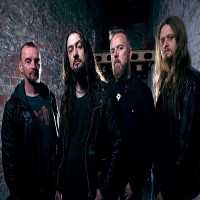 British thrash metal legends Xentrix have announced that their original singer and guitarist Chris Astley will rejoin the band for their upcoming European tour with Vio-Lence, Whiplash and Artillery. He will filling in for his replacement Jay Walsh who has a child due this November, the same month the tour happens and the band releases their new album Seven Words.

Walsh himself said: "It's much appreciated that Chris is up for covering these dates for us. It's a great tour, the guys will have a great time on it and I wouldn't really want the job dropped in anyone else's hands. It;s also an opportunity for Xentrix fans to see the band with Chris up front again so get tickets sorted now!! - It's funny how news comes that Phil Demmel steps off the tour and now Astley steps in...."

Guitarist Kristian Havard chimed in: “It's great news that Jay and his partner Louise are expecting another baby and we couldn't be happier for them both, it's always 'Family First' in this band. But after a time of so many cancellations, we wanted to try and find a way to still do the tour, so we were relieved that Chris agreed to step in and help us play the Headbangers Ball dates."