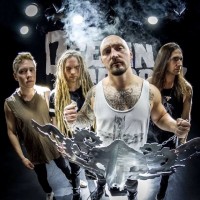 "Pryopen", the newest single from the Oceanhoarse's forthcoming record Heads Will Roll, has premiered online in the form of an official music video. The latter was directed by Pete Inkinen of Guilty Visuals. Heads Will Roll album is set for January 17th, 2023 official release.


A heavy pounding anthem but also a track with a serious and strong message, as singer Joonas Kosonen explains: "Pryopen" is musically fast and captivating, perhaps stylistically even in the direction of more modern American metal. However, the song's lyrics are about the struggle with addiction. The subject touches many of us either directly or indirectly and we wanted to offer strength to those who are fighting, as well as to those who have already lost a loved one to addiction. We wanted to keep the lyrics of the verses raw and straightforward, depicting internal battles in one's own head just when the will is about to break. The purpose of the chorus is to light a small spark of hope for those who struggle in their everyday life: 'Won't bend this time, cause now I'm taking back what's mine!"

Bass player Jyri Helko about the music video: "The video shoot was something extraordinary. We wanted to have a scene where Joonas is about to drown in the middle of the empty sea during night time, but obviously shooting a scene like that during the freezing winter in Finland is impossible. Therefore, we had to get creative and we spent a whole day decorating a small indoor pool in our friend's house to make it look like the real deal - I think we did a pretty damn good job with it."