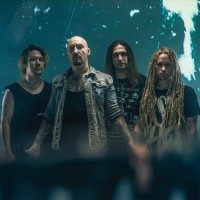 Heavy metallers Oceanhoarse are gearing up for the release of the band's sophomore full length, entitled Heads Will Roll, which will be coming out on February 17th via Noble Demon. In support of the new outing, the Finns have launched a video for the new single "Brick".


Guitarist Ben Varon comments about the song and video: "Brick" is what it sounds like to lose your sanity. This is the musical equivalent to a high-speed chase, or a 2-minute 45-second long nightmare. I can definitely hear the influence of late 80’s Megadeth here. Helmets on boys and girls!"

"This is a hi-speed recap of all the adventures we had last year: the amazing tours in Scandinavia, Central Europe & the UK with Soen, recording our second studio album Heads Will Roll, shooting some epic music videos and hosting our own indoor festival Hoarsefest. See you again in 2023!"