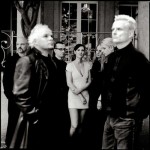 As part of their next studio record Himmelfahrt, due out on March 24th, Subway To Sally offer in listening the second advance single called "Leinen Los". It's available for streaming together with an animated music video, produced by Robert Gruss & Roger Libesch.


Subway To Sally on "Leinen Los": "To us, "Leinen Los" is a very important song on the new album Himmelfahrt and the lyrics are representative for the album. Even after thirty years of band history we experience new things. Getting back up after the forced pandemic break felt like a new start for us. So we weigh the anchors, set sails and sail full speed ahead into a new chapter of our band history. Leash Loose!”