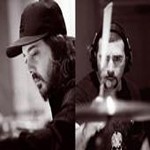 System Of A Down guitarist, vocalist Daron Malakian's new band with SOAD drummer John Dolmayan, called Scars On Broadway, has released its first song, entitled "They Say". Check it out at this location.
Malakian is currently recording the debut album of the group, simply called "Scars On Broadway". So far, three other song titles have been announced, "Universe," "World Gone Wrong" and "3005." Daron has also said that fans should expect another Scars album before another SOAD album comes out.

More info on Scars On Broadway at http://www.myspace.com/scarsonbroadway.

System Of A Down bassist Shavo Odadjian recently launched a music-based social networking site called urSession and is working on his own side project with Wu-Tang Clan member The RZA.

Scars On Broadway and Serj Tankian have both been confirmed for this year's Coachella Valley Music & Arts Festival, set to take place April 25-27 in Indio, California.