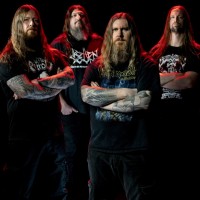 Swedish death metallers Vomitory have completed work on their seventh album, entilted "Carnage Euphoria", for a May 11 European release via Metal Blade Records (May 8 in Germany). The artwork of the album can be viewed here.

Commented drummer Tobias Gustafsson: "Carnage Euphoria" was a bit harder album to record than our predecessor, but damn, it was worth it! We are ridiculously happy with how the album turned out in the end! Engineer/producer Rikard Löfgren of Leon Music Studios did once again a killer job to get what we wanted for this album, and then some. Compared to our previous albums, "Carnage Euphoria" is a lot wider, warmer and more natural sounding-wise. But still, "Carnage Euphoria" runs you over like a steamroller, just as expected. The true Vomitoryelements are all in there, but there are also some more mid-paced groovy stuff that adds diversity to this album like never before. Even some ore melodic hooks that won't go unnoticed. Songs like "The Ravenous Dead" and "Great Deceiver" add fresh slices of flesh to the Vomitory slab, while "Rage Of Honour" and "Possessed" are rotting chunks of the relentless death metal Vomitory is known for."

To celebrate Vomitory's 20th anniversary, a limited first edition of "Carnage Euphoria" will be available with a 90-minute bonus DVD. Titled "Dead & Drunk For 20 Years", the disc will contain footage spanning the band's entire career - from the very first Vomitory show in 1990 to shows in 2008. Also featured will be one previously unreleased song, "Putrefaction", performed live in 1990, live clips from different shows during the '90s with different lineups and drunk moments on the road and in the studio. "It's all material from our own private archives, so this exclusive DVD has a certain "Cliff 'Em All" vibe to it - for good and for bad," says Tobias. "I hope you will enjoy it. We certainly do!"