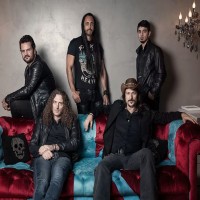 Sepultura and Angra go on tour together in Brazil and Latin America for the first time. A statement from the band reads as follows:

"The two greatest metal bands from Brazil, Sepultura and Angra, will go on a big tour together for the first time. The tour will cover all the Brazilian territory and many other Latin American countries. In Brazil, the tour will include more than 20 cities, with shows in the best venues in the country, like Via Funchal in Sao Paulo and Canecao in Rio de Janeiro, during the months of May, August and September.

Sepultura will begin its Brazilian tour promoting their new CD "A-Lex", after returning from a tour in Europe in February and March that included more than 20 countries. The band is already all booked for 2009, with shows in Europe, United States and Asia. The record has just been released all around the world and is receiving many praises from the Brazilian and international specialized media.

Angra, after a hiatus of about two years, comes back with full power to prove that still is the most important melodic metal band in Brazil. The group is preparing a big return, with a set list that includes the band's greatest hits and some surprises.

These are the shows confirmed for May: