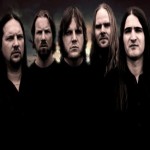 Vocalist Johan Lindstrand of One Man Army And The Undead Quartet has issued the following update:

"On the first of April 2009 our longtime friend and bandmember Mikael Lagerblad decided to quit the band. His thoughts has been towards this decision for a while now even though we haven't seen it coming. But being in this band is of course all about free will. If you don't feel comfortable in being in a band that plays extreme music and loving every minute of it, then you shouldn't be in the band.

Mikael has written a lot of good songs for this band but one should know that his contribution only has covered around 35-40% of the total Army catalouge. That means that we without doubt will be able to continue writing new great Army stuff for the future, despite this setback. I mean, for example, 95% of the first album " 21st Century Killing Machine" was written without him so this situation isn't something new and scary that will bring us down. It's of course a sad thing but not the end of the world.

For the next couple of months We have brought a session guitarist into the band that will help us out during some of the already booked shows that we have. So if you are worried that we will start canceling shows you should stop worrying. One Man Army doesn't quit. Setbacks like this always makes this killing machine stronger and stronger. We will play as much as possible for the "Grim Tales" touring cycle so c'mon, keep those bookings coming.

Our session guitar player is a guy named Rune Foss who also plays with both drummer Marek Dobrowolski and guitarist Mattias Bolander in their other band Reclusion. He is a great guitar player and a great guy on the personal level so doing a couple of shows with him throughout Europe will be a blessing. Mattias will handle all the solos at the moment. He is originally a lead guitarist and this task will come very natural for him. We definitely have an interesting time in front of us.

But of course, in time we will need a new fulltime member so this is the chance for YOU to proove that you belong in this great band. We only pay attention to Swedish applications. This for obvious reasons. It's kinda hard to rehearse with people that lives a million miles away from you. Lead or rhythm. Contact us anyway if you belive you are great in what you do."


Mikael Lagerblad added in a final statement: "After three albums and almost five years in the band, I have decided to quit. It has been a great time and I'm proud of the music that we have created. Even though One Man Army has been a big part of my life, I feel I'm ready to move on. During the last couple of months my motivation and inspiration has not been at the high level it used to be. It might sound like a cliché, but there's no bad blood between us and I'm comfortable with mydecision.

I want to thank the fans, the bands we have toured with, the companies and all the people that are involved in the band. Last but not least I want to thank Johan, Robert, Marek and Mattias for the great time and I wish all you guys the best in the future!"