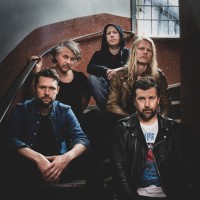 Burst have issued the following update:

"We are glad to announce that Burst will embark on our first US tour immediately following our appearance at the intriguing Planet Caravan festival in Asheton, NC on september 19. The tour will go through to October 10. Half the tour Burst and opener Zoroaster will be gigging with the draconian French metal philosophers Gojira on their Metallica off-dates, half the tour we'll do our own shows with Zoroaster. See all the dates here (a few extra dates TBA soon).

At the same time, we'd like to announce that our first US tour will also be our last. Following a band meeting at the end of June, we have decided that it is time to let Burst sleep.

We will honor our commitments, play the planned No Budget Fest in Larissa, Greece as well as the US tour, and a possible best-of show in Sweden in late fall. But after that and for the foreseeable future, Burst will lay down its arms. Whether it is definite or indefinite, we can't say. Thus, in accordance with modern internet heavy metal news site lingo, we'll call it an "indefinite hiatus".

Burst have made music in this constellation for over ten years now, and while our creative urges remain intact, the energy and motivation it takes to be in a band that continues to grow and gets a lot of touring offers has slowly but continuously weakened over the last years. Why? Who knows.

There are a million and one reasons why we haven't been able to reignite ourselves following the release of "Lazarus Bird". We were so proud of that album, and we should have had all the power in the world within us. But something's been missing. For a while now our band has been shaky, unmotivated and prone to a lot of internal discussions, and all that has sucked the energy out of us. That's not how it should be.

We guess the most significant reasons are that we have different views on what our band should be about, how much effort we are able and willing to put into it, as well as individual band members' wish to prioritize other things in their respective lives. We are too proud of our band and our music to let it slowly wither or perhaps explode in a flurry of intra-band conflict. So, we'll end it now amicably and avoid what could possibly turn into a less friendly split. We might have separate views and wills, but there is no animosity between us now.

When you think about it, being in a rock band is a fucked up social experiment: five different persons are to agree on something as individual as creative visions AND have the personal chemistry to be able to spend a disproportionate amount of time together on tour buses and cramped backstage rooms. There are a lot of nasty smells to be digested, a lot of insane behavior to be handled, a lot of mundane issues to be solved.

Burst is a shining example of this: being in this band is like being in a dysfunctional but loving family. There is a lot of love, and there are no huge egos - but there are a lot of strong opinions and disparate personalities that sometimes make it difficult to agree on where we are going. Burst has been the most important mission in our lives, but we have come to a point where we need to stop kicking the old, tired body.

Kind of sad though. Burst has been central for us all for so long. But hell, there is a point in itself to drastically change the components of your life now and then, isn't it? You might lose stuff that's important to you, but you probably gain something new. If you never change, if you never risk anything, you don't fucking live. Who knows, maybe we'll get together in a couple of years and make a new album. Given how we thrive when making music, the embers might start glowing again some time.

With that said, we are super excited to play in Greece and finally go to the US! We'd like to ask all fans to take this last opportunity to see Burst live - expect a band and a show in full power. Who dares, wins."