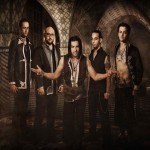 Tunisian progressive metallers Myrath will release their second album titled Desert Call on January 25th 2010. The album will be released in Europe on XIIIBis Records (Sony Distro) and the rest of the world by a yet to be announced prestigious American label. Mastering took place at House of Audio in Germany.

Myrath commented about the signing with XIIIBis Records as follows: "We are pleased to announce that Myrath has signed a contract with XIIIBis Records (Sony distribution) for the exclusive release in Europe of the new album Desert Call. We are extremely proud to be among the few metal bands to sign for one of the biggest labels in France (Home of artists such as Ray Charles, Alain Chamfort, Simply Red, Tears For Fears, Michael Jones, Mötley Crüe, Nine Inch Nails, Paul Personne, Status Quo, Patrick Rondat, Suicidal Tendencies, Trust and many others).

To this respect we wish to thank Mehdi El Jai (chairman executive officer), Samuel Pernes (administrative and financial manager), Emmanuelle Charles (Sales Manager) as well as all XIII Bis Records staff. A special thank obviously goes to our producer Kevin Codfert for his valuable support and for contributing so much in finalizing this contract."