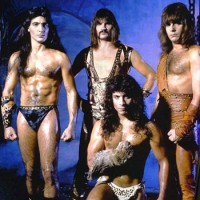 Manowar helped kick off the American power metal scene back in the '80s with their self-referential bombast and overdriven melodic metal. While their fame stems as much from their seemingly-blissful goofiness (and… 'memorable' artwork) as from their music, if not more so, their catalogue holds the resources to back up the years of shameless chest-pounding.

While at present Manowar has left off on an impressively bad note, quality material is truthfully not hard to come by. Often it is hard to look past the sheer absurdity that dogs much of Manowar's career, especially if you don't have the stomach for that sort of posturing. Despite this and the preposterous self-detonation they have been experiencing in recent years, Manowar have put a lot of worthwhile records on the wall, and cannot be discounted as an influence on the power and heavy metal scenes of subsequent generations.