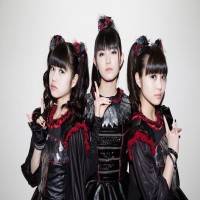 Two years ago to this very day, I published a review of Metal Resistance, the sophomore album of controversial "kawaii metal" act Babymetal, and I gave that album a wonderfully generous score of 9/10. At first, most people dismissed it as an April Fools joke, but some were suspicious - and when that review stayed up well past April 1st with no sign of take-backsies, it became clear that what I had done was no laughing matter. I had published something on the famously unforgiving internet wherein I showered laud on this "idol metal" trio, and I expected people to treat that as a genuine critique and take me seriously as a reviewer in the aftermath.

Ah, what a fool I was… Over these long and hideous two years, I've received comment after comment pleading with me to see reason or, more frequently, informing me that my credibility as a reviewer has been lost to the void eternally and irrevocably. Even now, fat, balding Exodus fans and teenage keyboard kvltists bravely refuse to let such a challenge go unanswered, making perfectly clear exactly which bands they prefer and why my taste is inferior. Some readers out there - and I don't use the term "heroes" often, but maybe they would be better called so - will never get over the fact that a respectable publication like Metal Storm let this nonsense fly.

Sure, I guess most sensible people would ignore such juvenile comments and listen to the music that they want to listen to, regardless of the opinions that strangers on the internet hold… but I'm not one of those idiots. I didn't become editor-in-chief of a webzine called Metal Storm so I could discourage gatekeeping. I have a responsibility to ensure that heavy metal remains as it always has been: static, safe, pure, enduring. Some things are simply never acceptable in this genre, and change is one of them. For all this time, I thought I was doing the right thing: expanding my horizons, exposing people to new sounds they weren't familiar with but might dig, encouraging growth and experimentation across musical genres. But then, one evening while I was lying in bed and staring at my Manowar albums, as I often do, it struck me. On those covers, I no longer saw a quartet of greased-up Conan-esque metal warriors gazing proudly into the distance at something that was probably pretty cool. Instead, I saw four slabs of heavy metal beefcake looking very disappointed in me, disgusted that I had profaned the holy genre by implying that it could somehow be changed, diluted, even - nay, dare I even suggest it? - improved upon.

How did I come to the conclusion that my ways were twisted and wrong? If I had to be honest, I would say it was the barrage of negative feedback. Nothing changes a man's opinion like being berated with angry clichés and illogical pseudo-arguments fired from the hip. And more than simply the comments here on Metal Storm, which, all things considered, were pretty dispassionate, it was the broader expanse of thoughtful critique and illuminating cultural commentary rushing to shore up the metal vanguard on all corners of the internet, just in case some unenlightened outsider happened to catch a glimpse of us not being totally f***ing br00tal all the time and fostered the wildly inaccurate belief that sometimes metalheads like cute stuff, too.

Heavy metal thrives today because of its rigid adherence to established tropes and predetermined avenues of songwriting. And, yes, naturally, there has to be some amount of deviation from the norm - that's how we wound up with this whole genre in the first place - but only within certain acceptable parameters. Punk and hard rock are acceptable nonmetal genres, if you have to wander - but folk, jazz, hip-hop, industrial, country, blues, noise, and especially pop music, and especially especially J-pop: stay away from metal if you know what's good for you. Not pure metal? Walk on home, boy. Somehow, swept up in all the hype of being a hopeless weeaboo fanboy desperate for any kind of attention from the Japanese metal scene, I forgot that I have a certain responsibility as a Metal Warrior. I must protect this genre from indignity, from mainstream exposure, and, most of all, from catchy melodies. Dance routines? Professional songwriters? Lucrative merchandising? Teenage girls? Absolutely unacceptable.

Heavy metal is not a genre for children. It's a genre for big, burly men and pale, weedy Scandinavians, and that's about it. Teenagers like these Babymetal kids have never produced a listenable metal album and never will; it's simply not within their physical capabilities. That's why albums like Death Angel's The Ultra-Violence, Slayer's Show No Mercy, Death's Scream Bloody Gore, and Helloween's Keeper Of The Seven Keys Part I are all complete dross. And while we're on the subject, this whole "female-fronted" genre got old very quickly. One Nightwish was more than enough, thanks; every other metal band with a woman singer is just a much worse ripoff. I guess Babymetal themselves aren't on that specific trip, but, you know, the point stands.

As someone who claims to be a professional reviewer, I don't know how I've slept at night knowing that, while Babymetal is loose on the world with their 9/10 review from a single insignificant, pasty, socially awkward editor whose opinion likely matters to no one outside himself, I've been casting aspersions on the recent output of infallible legacy acts like Metallica, Wintersun, Primordial, Mastodon, Abbath, Accept, Amon Amarth, and Machine Head. These are bands that have always been superior in every way to a manufactured idol group like Babymetal, simply because they write their own music, play their own instruments, and are just, you know, better, just because. A great band never deserves to be trashed, or even remotely critiqued or treated with an honest appraisal, no matter how substandard their current output. Metallica may not be good anymore, but they used to be - and if I've forgotten that, if I can't lace my review of Hardwired with the phrase, "Yeah, but remember how they also wrote Ride The Lightning" just so we're all on the same page, then I don't deserve to have and share an opinion about other bands.

Quite damningly, Babymetal toured with Lady Gaga and Red Hot Chili Peppers, who, as hated pop stars of our era, are avowed enemies of all things heavy metal. Clearly, defending the World's Greatest Music Genre isn't among their priorities, or else they wouldn't be teenage girls from Japan. And everyone who associates with Babymetal - formerly respectable names like Judas Priest, Carcass, Metallica, Opeth, Slayer, Rob Zombie, Marty Friedman, Chthonic, Guns N' Roses, Abbath, Lamb Of God, Deftones, Trivium, DragonForce, and Anthrax - is no longer welcome in the metal world. If you can tolerate this aural disease, you are immediately and eternally branded a poser, a follower of false metal, and you must leave the hall.

In other words… I am deeply and truly sorry that I ever held any sort of regard for Babymetal. When they released their first single in 2011, my reaction was one of disgust and indignation; I should have learned to hold onto such pettiness and let it define my life. I look back on those free and easy days of April 2016 and feel only deep shame and embarrassment at my naïve acceptance of this tragic marriage of unmetal elements.

Of course, this doesn't change the fact that K-On! is way better than Metalocalypse.

*Disclaimer: Part of the 2018 April Fools Collection. I'm quite happy with my Babymetal review, thank you very much!*